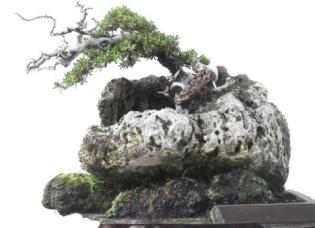 There is no doubt that Bonsai is a Creative Art form. Once the horticultural needs of the plant is met, the creative and art side of Bonsai kicks in. In thinking about this concept of creativity and how it applies to Bonsai, I had a lateral thought moment that it is not dissimilar to what Maslow proposed as the hierarchical needs of human beings. The major difference is that we do not work with an organism that can think when it comes to Bonsai. The lowest level of needs around the Biological and Physiological must be met for the tree to stay alive and the next levels applies to us and not the tree. Higher levels of Maslow’s theory do refer to the need for creativity and maybe through that, a level of self-actualisation for us as humans. There is a need for us to be creative. Not all of us are in touch with our creative sides. Mine came late. I realised that I could grow things, that I am good at educating people and once I was exposed to the Art of Bonsai, I found an area where I could feed this need to be creative and become involved in another where I could educate and be educated. 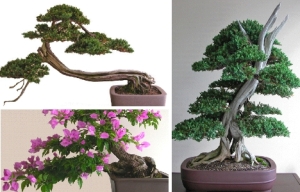 What is creativity? I have consulted the writings of some of the gurus on this topic and came up with the following: 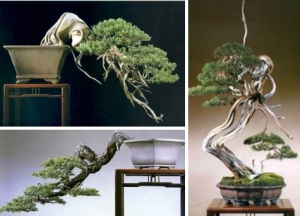 How can we apply this to Bonsai? I see three movements in the Bonsai world. The one is the creation of Penjing – landscape scenes mainly out of China. Another one is the following of the rules and “laws” of the traditional Japanese style and the third one, which is growing rapidly throughout the West, a more informal, creative style. Whatever path you take, creativity is needed to pursue it successfully. Sir Ken Robinson’s idea of having original ideas probably leans itself more to the more informal style as one is not necessarily bound by the “rules”. Although I have made a thorough study of both Penjing and traditional Bonsai, I find that I do lean towards a more informal, creative style. Why? It could be that it suits my way of thinking or it could be that the material I have available to work with, leans itself more towards it. The New Zealand Bonsai scene is relatively young compared to the rest of the world and we are bound by regulations through which we cannot import trees and have to rely on what is already here and then work according to what these trees allow us to do.

Is this a problem? No, I do not think so. I just had the privilege of helping to select the trees that will be on display at the National Convention later this year in Christchurch. The trees put forward for selection are of good quality and very dissimilar to each other. The variety tells me that there is a creative spirit or energy (Gelb) present. The lesson that I get out of this is that once we throw the shackles of conformity and “rules” off, creativity is enhanced. 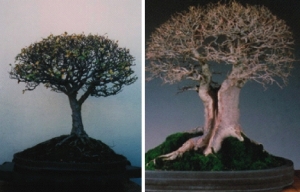 This is seen throughout the world. I am not saying that the rules and the foundations of Bonsai must be thrown away, what I am saying is that it is clear that where people have the opportunity to be more creative through what the tree allows us to do, the results are as spectacular as when we follow the traditional rules. It is fascinating watching our best Bonsai creators in action and studying their creations. Even the ones with a thorough traditional Japanese grounding show that you have to respect the tree and when we especially work with wild harvested material (Yamadori), the tree’s history must be respected in the design.

What does this mean for our creativity? You have to let the tree lead you, but within that you still have options. Some of these options will include the following of traditional “rules”, but where the tree does not allow this, one will have to apply original ideas (back to Sir Ken) and if this leads to a well-designed Bonsai tree, then creativity is seen in action. It has value as it has added to a body of knowledge, ideas and even new techniques that could be used in future. I can use the composition of Music as an example. The composer needs knowledge, technique and an open mind to compose. The composer would have studied Music, played it, composed it, made mistakes and would have experienced success. The same is valid for Bonsai creation.

Study what is available, practice a lot, work on minor trees and work on superior material as well, but above all, ensure that you have an open mind. What does the tree allow you to do? How do you use that to create beauty? Do you have original ideas? Do you add value?

My last thought for today: Look outside of Bonsai for inspiration. Read and use You Tube to learn about other creative pursuits and let these inspire you to be even more creative.

Creative Schools by Sir Ken Robinson. I am an education leader (something has to pay for my Bonsai addiction) and find that I can apply ideas from all over to my recreational and creative pursuits.

Wikipedia. It always gives me a heads-up when I start to wonder about things.

The photos on this page ashamedly (on my part) comes from this website: http://webecoist.momtastic.com/2009/06/09/tree-art-6-amazingly-creative-bonsai-artists/

I apologise if I have broken rules to use them here, but all I am trying to do is to promote Bonsai in general and certainly not for my own gain.

2 thoughts on “Creativity and Bonsai”