Sphagnum moss is used in a variety of ways in conjunction with growing Bonsai. The main characteristic of Sphagnum that makes it useful to Bonsai growing is its ability to hold a lot of water. Sphagnum moss plants can hold 16–26 times as much water as their dry weight. 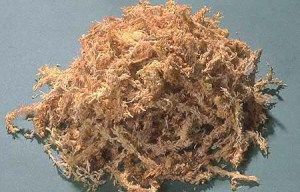 Sphagnum also does not decay easily as it contains phenolic compounds in its cell walls. It therefore can be used in applications that can take a long time to complete. It does not break down as easily as other growing mediums. Sphagnum originating from peat bogs is known to aid in preservation of substances due to the phenols, but also due to the fact that it grows in an anaerobic environment. Less oxygen means less decay. It is a well-known fact that bones and the remains of living organisms that end up in peat bogs tend to be quite well-preserved after a long period of time.

These mosses can also acidify its surroundings. This is something to keep in mind when the moss is used as a growing medium or part of a growing medium. It is therefore advised that sphagnum moss is not used with plants that prefer a more alkaline environment.

It is also a natural antiseptic. Sphagnum Moss was used extensively during the World Wars in field dressings to pack out wounds and under bandages to keep wounds clean.

Harvesting these mosses is hard work. It also comes from areas that could be ecologically very sensitive. These facts can contribute to the fact that good quality sphagnum moss can be quite costly. There are environmental concerns about the sustainability of moss harvesting.

In Bonsai cultivation, Sphagnum moss is mostly used in conjunction with roots and root growing. It is a well-known fact that when trees are harvested from nature (Yamadori) that it is a good idea to pack wet sphagnum moss amongst the roots. The reason for this is obvious due to the water holding abilities of the moss. During a recent dig, I not only packed the moss amongst the roots, but also wrapped it in hessian before it went into a plastic bag for the trip home. This not only held the moss in place, but aided in keeping the moisture in. I am also at the moment experimenting with two similar trees, one with Sphagnum in the soil mix and the other with normal soil mix. The question to be answered is whether the one shows more and better root growth than the other one. More on the results in a future blog.

Sphagnum moss is also used for air-layering. Again the moss is tightly packed around the wound created for the purpose of providing a medium for root growth. The water-holding capacity is again the main reason for using the moss. In this case it also helps to allow air flow through the medium which will aid in root growth as well. 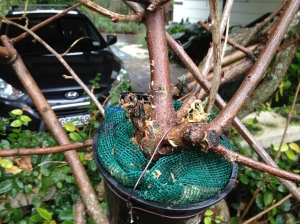 7 thoughts on “Sphagnum Moss and Bonsai”